Older, but not wiser

I keep abortively starting and then stopping writing a blog. Rosanne tells me I should keep one, "for your fans" but I suspect that's because when we first met she'd already read every one of my incredibly personal blogs over and over, and it made for a couple of awkward first dates. Especially as she's very quiet and very very shy around strangers. In fact I was 10 minutes late for our first date and apparently she'd nearly been sick with nerves. We then went on a date and as I'm a gobby cow I thought I'd do the talking, but thanks to my blogs telling all my best stories and the deeply personal first hour long show I'd done I had nothing she hadn't already heard.

I want to keep a blog, it's handy for me, and it was always fun to do, though I suspect now that I don't die on my arse nearly as often, nor do I take copious quantities of story enhancing narcotics I'm never sure if my stories are too tame these days. but ho hum.

Also these days I'm getting angrier with stuff in the news, I suspect it's because although I don't appear to age physically the portrait in my attic's starting to look pretty fucked, I'm now doing all the things my dad used to do and still does. I shout at Question Time, get angry at Any Questions (and more so at any answers) and the other day I had a discussion with a woman in Sainsbury's about how Nat West had managed to send out my new cash card to the wrong address TWICE with a pin number. Apparently it's procedure if your card's been stolen to reissue a PIN number. For Security. A security feature that's over ridden if they send it out to your old address EVEN THOUGH YOU'VE ASKED THEM TO KEEP IT AT THE FUCKING BANK FOR YOU. Anyway the most sure fire sign that I'm getting old was that after the woman behind the counter tutted "bloody banks" I said "Yeah, yeah! It's not wonder we're in the bloody recession we're in is it eh?" she laughed and I walked to the car whilst experimenting to see if I could actually eat my own fist.
I'd change banks but it turns out I've got such a bad credit rating I can't do that. I should have known, I can't even get a contract phone. A friend of mine can and he was declared bankrupt last year, so I should have realised.

Every day fills itself with these petty niggles, but to be honest I'm fairly sure they were there before I just had bigger things to worry about, or I was pissed and didn't worry about anything, I just got on with the day to day business of hating myself and plotting to bring about my destruction.

I've also rediscovered my interest in politics recently, and independently of each other 3 people have told me I should go into politics, which living by Richard Herring's rules in The 12 Tasks Of Hercules Terrace means that I have to do that. But not yet, I think I'll wait until the comedy career's over.

Though looking at what passes for scandal I'm not entirely sure I'm cut out for the cut and thrust of political life.

There's no easy way to link this in, and the above is a very clumsy way of attempting and it doesn't work so I'm just going to say it. 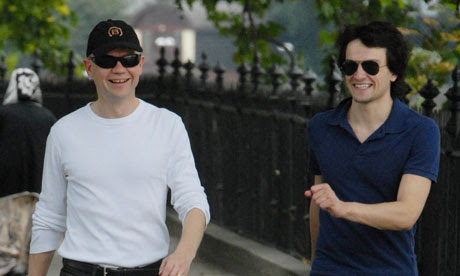 Actually that's not 100% true, I hope he hasn't and isn't gay and doesn't come out, because we're doing fine without him. If he did come out it'd be a bit of a PR disaster for us, the same as with Cliff Richard. If it ever looks like he might, I'm going to launch a campaign to keep Cliff in the closet. And to be honest if I had William Hague's voting record on gay rights I wouldn't come out either.

There's a couple of things about the whole affair that don't quite sit right with me though.
Firstly in his press statement he said that the only thing he could think of where he'd gone wrong was to book in to a twin room with his aide whilst on the campaign trail. I don't think anyone sees that as in any way suspicious, unless you were actually having an affair and said "Right they're going to think we're having an affair. We'd better get twin rooms so that they don't think we're having an affair." and then to have got to the hotel and walked up to the counter and had the following conversation with the woman on reception:

"Certainly Mr Hague, we've got two nice double rooms with a good view is that any good for you?"

"Erm, no it's not, erm, you know what with the bloody economy and all that we should probably tighten our belts, we'll just take the one room if that's ok. hehehehe imagine if it got out that we were wasting money on two rooms, that would be a bit of a scandal wouldn't it. Nope we'll share a room, there's nothing wrong with two men sharing a room."

"Of course Mr Hague, Well then we do have a nice twin room for you."

"Come on babe I've got the room booked."

The above is the only circumstance I can see in which getting a twin room on the campaign trail would be suspicious. In fact in my experience as a gay lady what sleeps with other gay ladies and gets up to all sorts of rudies and that in a hotel room requiring a frequent change of sheets, if you're both the same sex, no matter how gay you look (and me and the mrs do look pretty fucking gay.) They will try as far as possible to give you a twin room. I've booked a double before turned up with Rosanne and they say "Erm, it is a double room is that alright?" I say "Yes." and they say "We can get you a twin room if you'd like." and I say "No because then we'd just have to push the beds together and that would leave me too tired for all the sex we're going to be having in that room." and they usually acquiesce.

But that's not the main thing that sits as weird in the press statement, the main thing that's odd is that he finishes it after denying that he's slept with him or any other man by saying about him and his wife having difficulty conceiving, and that his wife is prone to miscarriages.
It's an awful situation for any couple to find themselves in and they have my sympathy, however it is incredibly cynical, as the inability to conceive has little to do with being gay or straight, aside from the odds of conception being greatly reduced by having sex with someone of the same sex as yourself. I'm no biologist, but I'm fairly sure that's how it works.
I know there's some quacks and witchdoctors and homeopaths and that who would say if you can't conceive it's because God's angry with you, but they're just nutters who really need adult supervision until they stop believing in fairies and the like.

The other thing is that his aide has resigned to help stop the allegations. That doesn't make any logical sense whatsoever. Surely if there's no truth to it then there's no reason to resign and the rumours will go away as they're just rumours. By resigning you're essentially going "I didn't do nothing and the nothing I didn't do isn't going to happen again because it didn't happen in the first place and besides how could it happen again if I'm not even working for him anymore even though it didn't happen in the first place."

Surely the only reason to resign is because something did happen, and you don't trust yourself to be able to not let anything else happen so you're running away to protect yourself and your secret lover.

By talking about it though I know that it somehow makes me complicit in the media circus surrounding it, which I'd not want to be, as yet again all sections of the press manage to drag out gay Tories (yep, I know, it doesn't matter how you try and say "Gay Tories" it doesn't seem right does it? It's like "Jewish Nazi" or "Nobel Prize Winning Big Brother Contestant") to talk about how people should be allowed to keep their private lives private. And talk about this being "the dark side of gay liberation." It's essentially a chance for self hating gay men to prattle on about how society would be much better if all gay people had to hide in the shadows of some murky twilit hinterland, where the gay menace lurk'd in the "wrong part of town." a dickensian place where you can imagine immaculately Victorian dressed gentlemen in make-up leaning out from behind dull gas-lit street lamps offering to "gum your tommy for ha'penny".
Having said that it is a marvellous idea for a theme park.

There's a problem with the argument that gay people's private lives should be private and who they choose to sleep with should be of no consequence. Whilst I agree with part of that, the other part is unworkable, for a simple reason.

Straight people's sexuality isn't private. They're constantly shoving it down your throat, twatting on about boyfriends and girlfriends, husbands and wives, what they got up to that weekend in Ikea buying things for the flat that they live in together the filthy swine! Talking about going on holiday together, sharing a double room! And that most dastardly heterosexual trick of all going on abut their bloody kids, they're always flaunting that one "oh I've got kids, that proves I've done it with someone of the opposite sex to me." Congratulations, you've fulfilled your obligation to society by reproducing, how wonderful for you. "Yes I've got kids have you got kids? We've done it, and the result of our doing it is a baby."

Perhaps that's what Hague was trying to do, prove that he'd done the sex on a lady but that something was broked and it wasn't that he was gay.

Bethany Black
Once described as "unremarkable" by a clueless imbecile, she has gone on to astound and amuse audiences throughout the UK. Telling the excruciatingly embarrassing true stories from her daily life, through her honesty and confessional style she has started to build herself a cult following. This goth, lesbian stand-up comic is certainly nothing short of utterly unique...